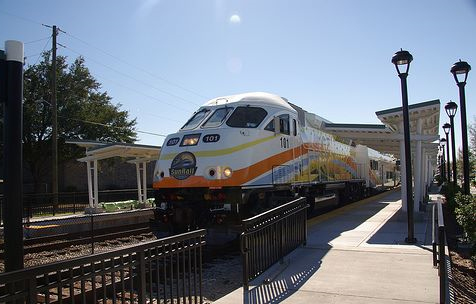 A SunRail commuter train pulls out the station, whisking people to work in Orlando

Florida is finally on a fast track for good rail service. SunRail, the greater Orlando commuter rail service opened May 1, 2014 and ridership has been good not only among commuters but also among tourists, shoppers and basketball game=goers on holidays and evenings. It has been so successful that plans are already in the works to extend it on both ends and to provide eventual service to the Orlando airport.

This railroad is both welcome and long overdue. It joins Tri-Rail, on Florida’s east coast (Palm Beach to Miami), as a regional solution to traffic congestion and a great way to get around. Tri-Rail is currently looking for funding to extend service into downtown Miami instead of the outskirts.

The new state-of-the-art railroad cars have tables, free wi-fi, power outlets, clean restrooms and comfortable seats. The double decker cars also provide a great view. Does your automobile have all that? Mine doesn’t and it burns $3.77 premium gas to boot (today’s local “discount station” price”) and holds five at maximum but two can ride in comfort. According to SunRail, it costs about $35o in fuel to run the whole train on a 63 mile round trip, with capacity for hundreds of passengers, each one having a lot more room and amenities than they would if they were riding in my BMW 328i coupe.

So welcome to Florida, SunRail. We’re glad to have you and wish you hundreds of thousands of satisfied and green riders. Now Floridians who appreciate train travel have commuter trains just like New York, Chicago and Paris.

We also have several Amtrak trains for long distance travel. I’ve taken one recently from Tampa to Jacksonville on business and it was great. I had a nice dinner in the diner and worked on my laptop at a table in the lounge car in true comfort. And it was on time too.

Florida’s Governor committed a massive error when he turned away a firm commitment of $2.3 billion (yes, billion, with a b) in Federal funds three years ago for a high speed rail system that was shovel ready. He even ignored a promise by a major rail system builder to make up any deficits the system might incur in operation. Imagine how many jobs were left uncreated and how convenient for tourists to take a high speed train from the airport to see the Mouse.

Hope may be coming down the track, however. All Aboard Florida, a private company that is owned by the same Jacksonville to Miami Florida East Coast Railroad that once operated a fleet of passenger trains, has proposed to build and operate a private passenger rail system from Miami to Orlando. It is already in operation using existing tracks between West Palm Beach and Fort Lauderdale and will soon be extened to Miami. Also in the works is a a new right of way down the center of an existing toll road from the East Coast to Orlando airport. Start-up is promised for 2019. The company has already completed stations in South Florida.

We hope it happens and we’ll certainly ride the line and write a Welcome All Aboard Florida blog when the full system opens.

Since it is not depending on state or federal funding, it seems to be “Governor proof”and will not meet the same fate as the almost-launched high-speed rail system in Florida Let’s hope the NIMBY ememies of modern rail transport will be foiled this time.

By way of disclosure, I have written a feature article on SunRail which was published in the July, 2015 issue of Trains, the national railroad magazine.