Traveling Like A Railroad Baron: Private Train Across The Cascades 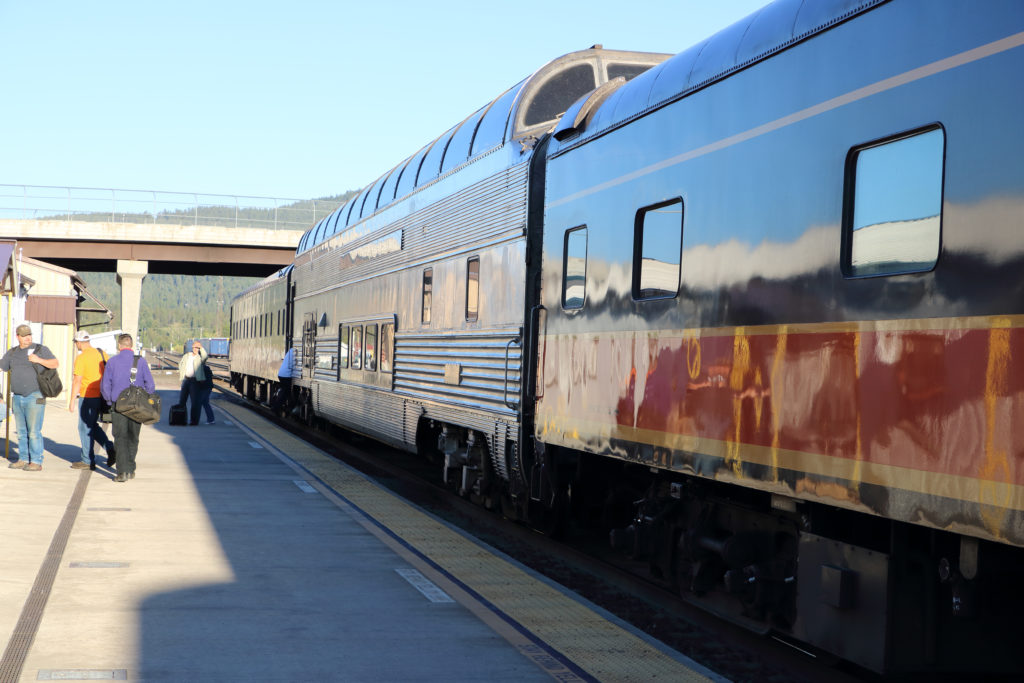 Our private cars tucked on the end of the Empire Builder on the platform at Whitefish, Montana.

Moira, our tour guide, led us out a private door from the main waiting room of Seattle’s King Street station onto the platform. We walked past the scores of passengers lined up inside the station waiting behind a barrier to board the waiting Amtrak Empire Builder passenger train for their journey to Chicago. We followed Moira down the platform past the Amtrak cars to the  three private cars (“varnish” in train buff lingo) that were attached to the rear of the Empire Builder.

As we reached the open doorway of our private sleeping car, an impeccably-uniformed attendant bid us a warm welcome, He helped us up the steps, showed us to our compartment and assisted with stowing our luggage in our bedroom on rails. Once settled, we were invited to make our way to the beautifully-appointed dome car coupled between the two Pullman-style sleeper cars. There we were greeted by the car steward and his two assistants, both attired in the finest Pullman dining car style. As the steward introduced himself and showed us to table with a fresh linen table cloth and offered us a drink and hors d’oeuvres, we felt quite special. That is probably the way James J. Hill, the railroad baron who built this line must have felt as he traveled in his private cars aboard his Great Northern Railway, the very route we were about to traverse on our way to Whitefish, Montana, high in the Rockies and adjacent to Glacier National Park.

Within a quarter of an hour, after the Amtrak passengers had boarded their coaches and sleeping cars, the train began to move, precisely on time at 4:45 p.m. The view from the dome car was spectacular as the train made its way through downtown Seattle, wound through the suburbs and traversed the shore of beautiful Puget Sound. As we rolled through small towns and watched sailboats on the Sound, the car attendants were busy passing hors d’oeuvres, refreshing drinks and setting the tables for dinner. Meanwhile, our fellow passengers on the Uncommon Journeys Elegant Canadian Rockies tour chatted and got to know each other.

Soon the car attendants began taking dinner orders, giving passengers a choice of four entrees. The food was plentiful and quite good, surpassing the fare we have experienced on Amtrak dining cars and at least rivaling that served on the Via Canadian which is known for its excellent onboard food.

As the late afternoon turned to evening and dessert and after dinner drinks were proffered, the train left the coast and began its climb into the rugged Cascade Range. Our vantage point from the elevated dome at the rear of the train gave us a never-ending series of incredible vistas as the long train snaked over bridges, through tunnels and swept along sweeping curves with memorable glimpse of valleys and peaks as the setting sun cast its rapidly-changing light on the landscape. We passed through many small towns and stopped at a couple of them as darkness approached. There was quite a bit of interest in our private cars judging by the stares and attention given to us by people at the stations and along the way as we rolled toward Spokane and the Columbia River Valley.

Despite the serpentine route necessitated by the mountains, the ride was smooth and quiet. There was little of the lurching that often accompanied mountain railroading and it was easy to walk through the cars as the train.

We retired to our bedroom and found that the sleeping car attendant had made our bed while we were at dinner. The space was small but well-appointed with a window to the outside with a privacy shade, a private bathroom and sink and some small spaces to store luggage and sundries. The beds were bunk style with a ladder to reach the upper bed.  They were comfortable and the gentle rocking motion of the train (and perhaps the effects of a big meal and accompanying drinks) made sleep easy for us, since we are accustomed to sleeping on a train, although some of the first-timers among our group of 27 found sleeping on a train a bit challenging.

At 6:30 am, I awoke and dressed and left the sink and bathroom open for my wife as I made my way to the dome in search of coffee. I was not disappointed. The dome car staff had coffee and a continental breakfast ready as we rolled across the striking Montana landscape toward our destination of Whitefish, Montana, adjacent to Glacier National Park. One by one, the passengers wandered in for coffee and a bite as we learned that we would reach Whitefish about 7:50 a.m., twenty minutes late. We had traversed almost 700 miles in consummate luxury. 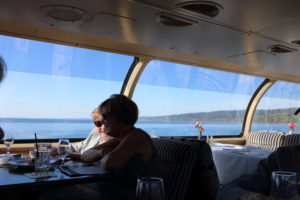 Our group detrained at the beautiful old Whitefish station and our chartered bus driver was on hand to load our luggage on the bus and take us to breakfast. As we left the station, our train whistled off and headed toward its rendezvous with more Uncommon Journeys passengers at West Glacier, Montana and its ultimate destination of Chicago.

Ahead of us was an adventure-filled week of touring the U.S.A.’s Glacier National Park and Canada’s Waterton Lakes, Banff and Yoho National Parks. Behind us was the train experience of a lifetime: traveling like a railroad baron of old on a luxurious set of private varnish. James J. Hill would have been impressed. We were.