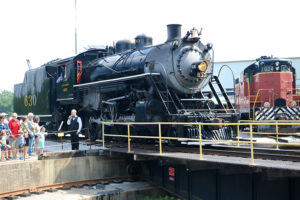 Locomotive 630 on the turntable at East Chattanooga while passengers watch the operation of turning her.

It is only three large steps up from the platform to the cab of Number 630, a 114 ton steam locomotive. But as I mounted those steps, it was as if I had climbed back in time a full 113 years. At the top of the steps, I stepped into the cab of an operating steam locomotive that was a modern 2-8-0 Consolidation when she was delivered to the Southern Railroad in 1904.

After 48 years of faithful service pulling freight trains in Tennessee and elsewhere, she was “retired” in 1952. But this huge machine leads a charmed life. She escaped the scrapper’s torch, the fate of most of her brethren, by taking on a new life pulling excursion trains for a short line, a railway historical group and survives today as part of the Norfolk Southern Railroad’s 21st Century Steam Program, a successful public relations effort by a major U.S. railroad.

Her home base is at the Tennessee Valley Railroad Museum in Chattanooga, Tennessee, where she pulls excursion trains several times a week and is lovingly cared for by the mostly-volunteer crew at the T.V.R.M.

My cab ride was a memorable experience. After greeting the engineer and fireman, I was given a short orientation around the cab ((Don’t touch this—it’s hot! Here are the throttle and brakes. Watch out for the swinging bell chord, etc.,) and invited to sit in the fireman’s seat on the left side of the cab. The engineer was in the right seat and the fireman stood beside me, between me and the engineer and reached back into the tender and shoveled coal into the red-hot firebox every few minutes to keep the 190 lbs. of steam pressure needed to operate the locomotive at peak power. He also adjusted one or the other of the two injectors that added water from the tank in the tender behind us into the raging maelstrom in the boiler to make steam. He also called the position of switches we approached to the engineer, who repeated back what he heard.

As we pulled away from the East Chattanooga Station with three cars full of passengers, the first thing I noticed is that the cab was a good bit warmer than the outside air when the firebox door was closed and downright H-O-T when it was opened.

The ride was fairly smooth, with the “chuff-chuff stack talk” beating a steady rhythm of four chugs to each revolution of the 56 inch driving wheels below and the locomotive gently swaying back and forth as she made her way down the undulating track. The level of noise was not excessive, more than in a car at highway speed but less than in the passenger compartment of a jet taking off. 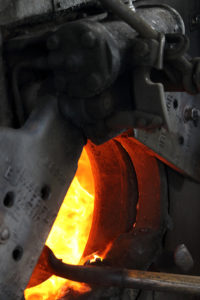 The firebox of 630 was like a volcano when the clamshell doors were opened by the fireman.

On the way back to Grand Junction Terminal where the train originated, we crossed four bridges over a river, highway and a mainline railroad and went through one tunnel, under the Missionary Ridge civil war battlefield.  As we approached the tunnel, we shut the cab front door and windows that has been left ajar for ventilation to prevent coal smoke from flooding into the cab and choking the crew. As soon as we existed the tunnel, we opened things back up and the blast of outside air was cooling and welcome.

The locomotive whistle sounded its sonorous tones that echoed across the valley as we exited the tunnel, crossed roads at grade and spoke its special language to the crew who helped us switch in the yard and around and over a Y-shaped track to bring us back to Grand Junction Station’s platform, oriented the right way for the next trip.

What a fantastic ride in a living, breathing time machine that belched smoke and steam, panted as if she were alive and showed me in a very real way what it must have been like to be a locomotive engineer or fireman at the heyday of the steam locomotive in America.

You can experience the golden age of steam yourself at the Tennessee Valley Railroad Museum in Chattanooga by either buying a ticket as a passenger on one of the many steam-drawn excursions the museum operates or arranging in advance to pay a special fee to ride in the cab and contribute to the upkeep of the vintage equipment owned by the museum. All aboard!