There is something special about railroads and travel by train. From riding tourist trains in an open car at less than ten miles per hour while being pelted by cinders through today’s high speed trains that zip through the European countryside at 220 miles per hour, railroads and trains have captured our interest and imagination. Best of all, on the best of trains, travelers can sip a glass of Champagne and gaze through picture windows in the lounge car as the train speeds them to their destination.

Why has the romance and practicality of the rails persisted into the 21st century, despite intense competition from automobiles and airplanes? Why is it that travel by rail continues to be the preferred land conveyance for legions of smart travelers and urban commuters?

Could it be because passenger trains have large and comfortable seats, roomy aisles and huge windows compared to an airplane?

Might it be because railroad terminals are just less of a hassle than airports?

Is it because of the fascinating towns and countryside the train traverses, offering a constantly-changing tableau of the land and its people?

Perchance is it that fellow travelers on a train tend to come out of their shells and chat with perfect strangers?

Might it be that many trains still have real dining cars that are moving restaurants with sit-down dinners, great service and often gourmet-quality food and drink?

Or could it be that overnight trains still offer sleeping accommodations, thereby saving the need to get a hotel and allowing travelers to arrive at their destinations refreshed?

Is it because train travel is usually less expensive than air travel or renting a car and driving and nobody charges you to bring a couple of bags with you?

Might it be because nobody frowns at you when you get out of your seat, enter the roomy aisles and stroll around the train?

Truly, the answer is all of these. Travel by rail is more popular than it has been in decades and a golden age of passenger train travel is dawning in some places. All the progressive industrialized nations of the world (except for the U.S. A., alas) have sophisticated high-seed passenger rail systems and are expanding them as quickly as budgets allow. Even in the USA, Amtrak, despite its seemingly-permanent funding peril thanks to a short-sighted Congress, is setting ridership records.

The Romance And Excitement Of The Rails
You don’t have to travel on trains to enjoy them. The global rail network has attracted millions of enthusiasts who love, watch them go by and learn about them. Some, like Johnnie Cash or Arlo Guthrie, even sing about them.

Train travelers worldwide can spot people at trackside camera in hand and radio scanner handy. In the U.S.A., we call them railfans and they even keep several enthusiast magazines in business. In North America, they have transformed locations like Horseshoe Curve in Altoona, Pennsylvania, the Cajon Pass in Southern California, Durango, Colorado, Canada’s kicking Horse Pass, Folkston, Georgia, metropolitan Chicago and elsewhere into iconic gathering places for the celebrants of steel wheel upon steel rail. Scores of short lines still haul freight and passengers with refurbished trains from a bygone era. Refurbished railroad stations like St. Louis Union Station or The Chatanooga Choo Choo complex, railroad themed restaurants and hotels are popping up around North America. Rail museums (many with operating steam locomotives far older than the volunteers who run and lovingly maintain them) are major tourist attractions. Even some big mainline freight railroads like Norfolk Southern and Union Pacific maintain small fleets of historic locomotives and passenger cars and operate mainline steam-pulled excursions for public relations purposes. England, too, is a hotbed of historic rail excursion operations and excursions and museums can be found in Switzerland, Germany and elsewhere. The romance of the rails still pulls children of all ages trackside and on board.

Disclosure: The host of  this web site was bitten by the railfan bug when he looked out the window of his elementary school and saw trains run by and has been hooked ever since. 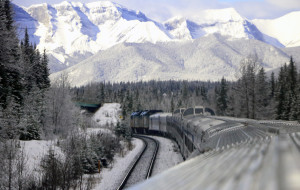 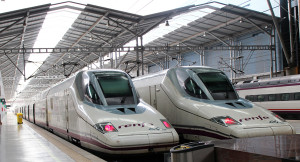 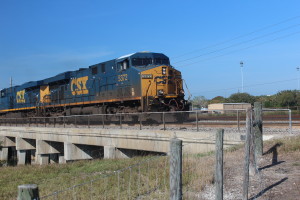 A train full of Tropicana orange  juice heads through Tampa on the way to New Jersey. 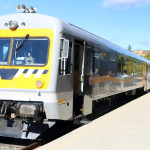 October, 2015: As our taxi pulled in to the train station in Quebec City, our about-to-commence train trip from Quebec City to the Charlevoix region of Quebec was already off to a spectacular start. Right behind the station platform. the mighty Montmorency Falls as the river of its namesake tumbled into the St. Lawrence from a height of 275 feet, the highest in Quebec and 98 feet higher than Niagara Falls. The station afforded an amazing view of the cataract and was so close to the falls that the roar and mist from the falls were hard to ignore. 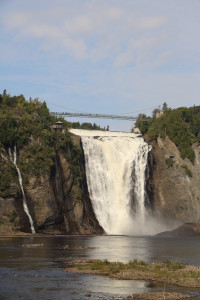 Baie St. Paul, our destination, is a delightful and picturesque town of 7,332 on the St. Lawrence. Where the Gouffre River flows into it. It is the seat of the Charlevoix Regional County Municipality and is filled with hotels (including the beautiful hotel Le Germain, right at the train station), art galleries, shops and restaurants.