From Toronto to Vancouver By Train: Watching A Continent Unfold From A Luxury Dome Car. 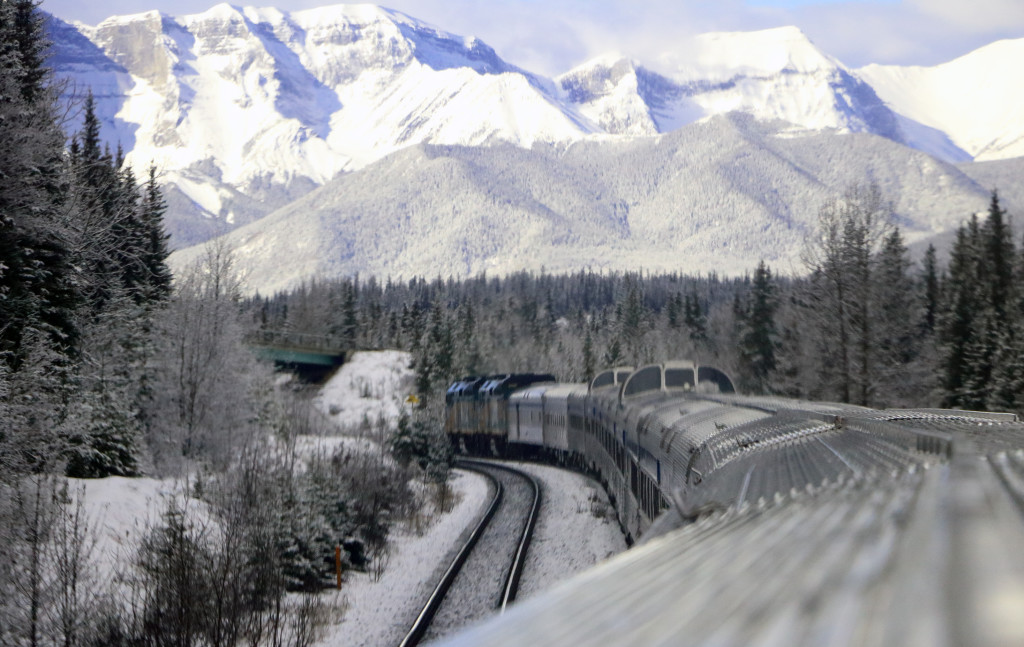 The breathtaking Front Range of the Canadian Rockies as seen from the dome on the Canadian’s observation car.

There was a tangible sense of excitement among the sleeping car passengers who gathered in the Toronto Union Station departure lounge at 9:30 p.m. on a Tuesday night in late March. They-and we-were there to travel across Canada on Via Rail Train Number One, the storied Canadian to Vancouver. Soon, after we made our dining car reservations with the train’s crew working in the departure lounge, the announcement came that it was time to board. We all took a short walk to the platform and there it was: 17 cars of gleaming stainless steel that was to be our home and chariot across the continent for the next four days.

We were shown the way to our first class sleeper car and inside to our small but nicely appointed compartment with upper and lower beds, a sink and a toilet. As we stowed our two carry-on bags, the car attendant came around and told us first about his daily routine of changing the compartment from day sitting room to bedroom and back and then about the shared shower for passengers in this car just steps away in the corridor. Then, in a pleasant surprise, he invited us to walk four cars back to the last car in the train, the Glacier Park dome lounge, for complimentary champagne and hors d’oeuvres as the train departed.

Once in the last car, the car’s lounge attendant beckoned us to climb the few stairs to the dome and enjoy the view. What a view! A few minutes later, precisely at 10 p.m., as advertised, the train began to move slowly out of the station. Suddenly, at the end of the covered station platform, Toronto’s night lights and sights burst into view from our 360 degree glass vantage point. The lights in the dome were very dim and seemed to frame the passing panorama as we glided under the brightly-lit CN Tower and through downtown Toronto and toward points north and west. As we sipped champagne and partook of a nice selection of passed hors d’oeuvres, urban scenery gave way to suburban and then exurban. Our journey across Canada had begun in a memorable way. We retired to our sleeper convinced that the rest of the trip on Train Number One would live up to and even exceeded this auspicious beginning. We were right.

For a little over four days and nights, our magic carpet on rails took us across the massive Canadian Shield, the vast prairie and through the awesome Canadian Rockies. Not only did most of a continent pass by our windows, we also had the pleasure of enjoying hours of great conversation with some fascinating fellow passengers, spontaneous group singing and a lot of good food and drink. Travel doesn’t get much better than this.

The train consisted of 17 matching and totally-refurbished 1950’s era luxury passenger cars  pulled by two powerful General Motors F40PH2 locomotives (with V16 engines producing 3,000 horsepower each plus 500 horsepower each driving generators for train heat, light, etc.). Behind the engines were a baggage car, coaches, a dome for coach passengers, two domes for first-class passengers (an activity dome in front of the dining car with movies, wine and beer tastings and game tables on the level below the dome and the Glacier Park observation car), and several sleeper cars. 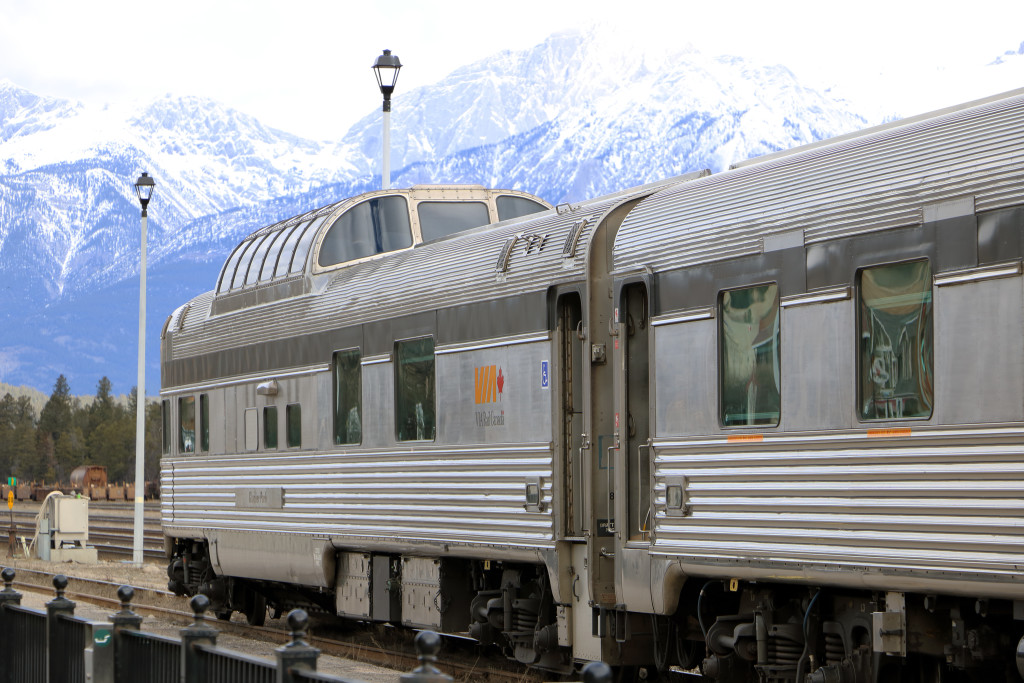 The Glacier Park Observation Car in Jasper as the train paused for a stop. 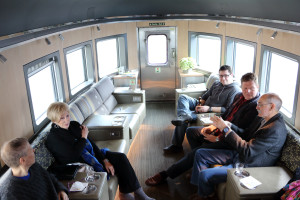 observation cars, the last of a breed in regular operation) is a marvelous place for first-class passengers to watch the train snake around the curves and enjoy great conversations, impromptu entertainment from passengers playing instruments and singing. There was also a section with tables and an unlimited supply of free coffee and tea and very attentive bar service.

Meals in the dining car were included in the fare for first class passengers and the food was quite good. It was even better than the good food service we remember on an Amtrak cross-county journey 20 years ago before budget cuts put pressure on the value of much of the U.S. railroad’s food offering. It was good enough to be worthy of the fine intercity European trains I have experienced. The staff was efficient and pleasant and there was always a choice of entrees and desserts and large portions. Breakfast seating was open between 7:30 and 9:30 a.m. Lunch and dinner seatings were called according to reservations-with three seatings (5:15, 7:15 and 9:00 pm) west of Winnipeg and two seatings (5:15 and 7:15) between Toronto and Winnipeg because the train was less crowded on the eastern part of its run, at least in March, when we went. The only extras were drinks from the bar which featured some very nice wines from British Columbia’s Okanagan Valley at reasonable prices.

The first morning on board, Wednesday, we woke and made our way to the dining car to enjoy coffee and a made-to-order omelet with toast and sausage in the diner as we sped at 80 m.p.h. in bright sunshine across the massive Canadian Shield. Outside were hundreds of miles of snow-covered pine and birch forests broken up by a few small towns, massive rock outcrops and frozen lakes. The sparsely-populated countryside was endlessly fascinating. The train pulled into a siding every so often to meet a freight train heading east and despite the stops, we were ahead of schedule all the way!

After returning to our now made-up-for-day bedroom to brush our teeth and grab our books, we headed for the Glacier Park and there quickly made new friends-mostly Canadian but a few Americans too. The political and cultural discussions that evolved during the day (and continued throughout the trip) were spirited and respectful. Ginny and I, both political junkies, were truly impressed by how much almost every Canadian we encountered knew about their political system and ours too-and how interested they were in both. They understand more than most Americans how intertwined the political economies of North America have become.

After Wednesday’s lunch and dinner in the diner, we walked back to the Glacier Park car and were delighted to find one of the passengers had a fiddle, one had a guitar and they were spontaneously accompanying a railroad-sponsored professional musician who was playing a guitar and singing. Together, they entertained us for hours. Everybody joined in with requests and sang along to the Canadian and railroad songs. It was a fabulous experience that we will remember fondly for a long time. It happened on Thursday and Friday nights too.

As we approached Winnipeg on Thursday morning, the passing tableau of the Canadian Shield outside the large windows gave way to the great prairie with vast farms, grain elevators and seemingly endless sight lines. The occasional snow flurry was not unpleasant to see from the warm and comfortable inside.

We arrived at Winnipeg and had a couple of hour layover, as they railroad changed crews, washed the exterior and restocked the train. As we exited the large station, we could see the amazing modern architecture of the new Human Rights Museum. We took the advice of some Canadians on the train and used our layover time to tour it. The displays were impressive, the view from the top was expansive and we recommend it highly.

We also had time to all-too-briefly visit the Winnipeg Railway Museum in the depot. 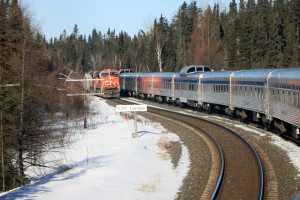 Meeting a freight train on the Canadian shield

When we reboarded and headed west around mid-day, the train spent the remainder of the day traveling across the vast distances of the Canadian Great Plains. Interspersed with lunch and dinner in the diner was more great conversation in the Glacier Park. By now, people knew each other’s’ names and the conversation turned into a hours-long salon of ideas rolling across Canada at 80 miles per hour

Friday was a scenery day extraordinaire. In the morning, we saw the Front Range of the snow-capped Canadian Rockies looming in the distance and we climbed toward them for an hour or so. By now, the domes were crowded with sightseers and photographers. Suddenly, around a curve, we were in the mountains rather than running toward them. The view from the dome was breathtaking and was accompanied by hushed conversational tomes and the steady click of camera shutters.

After winding through the mountains and snaking around countless curves and through many tunnels on a partly-cloudy and moderately warm day for late March, we pulled into the mountain resort town of Jasper, filled with restaurants and souvenir shops and surrounded by the Canadian Rockies. Our layover was long enough to detrain and explore the small town and we vowed we would return some day. Once we got back on board mid-afternoon, the Rockies continued to unfold outside of the train in a scene that is so beautiful that words do not do it justice.

After dark Friday night, the train continued to wind through the rugged and twisting Thompson and Fraser River canyons. The lights of passing towns and settlements, the mountain peaks and even stars in the sky were gorgeous despite the lack of daylight.

Saturday morning, we woke to an announcement of first call for breakfast in the diner and the news that we were about an hour ahead of schedule and would arrive in Vancouver shortly before 9 a.m. For a full hour before we glided to a stop at Vancouver Station, we passed through that cosmopolitan Pacific city’s exurbs, suburbs and downtown, overtaking commuter trains, crossing the great Fraser River on an impressive bridge and enjoying an early spring morning with cherry blossoms in full bloom.

As we pulled into Vancouver Union Station at 8:30 Saturday morning, almost an hour early, and said our goodbyes to our new friends, we were truly sorry to see this incredible train trip end. Yes, we were glad to be in Vancouver and looking forward to the adventures ahead of us there (especially the Vancouver Photowalk tour with a professional photographer to photograph cherry blossoms in gorgeous Stanley Park), but the 2,775 mile trip truly deserved its reputation as one of the world’s best train trips. For us, it was amazing and we recommend it with great enthusiasm. It is the way to see Canada, eh? 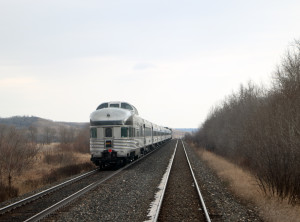 Train Number Two, the eastbound Canadian, meets us not far from Edmonton.