By Train Through Quebec Along The St. Lawrence River 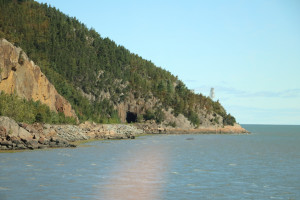 Near Baie St. Paul is the line’s only Tunnel

September, 2015  As our taxi pulled in to the train station in Quebec City, our about-to-commence train trip from Quebec City to the Charlevoix region of Quebec was already off to a spectacular start. Right behind the station platform. the mighty Montmorency Falls as the river of its namesake tumbled into the St. Lawrence from a height of 275 feet, the highest in Quebec and 98 feet higher than Niagara Falls. The station afforded an amazing view of the cataract and was so close to the falls that the roar and mist from the falls were hard to ignore.

Baie St. Paul, our destination, is a delightful and picturesque town of 7,332 on the St. Lawrence, where the Gouffre River flows into it. It is the seat of the Charlevoix Regional County Municipality and is filled with hotels (including the beautiful hotel Le Germain, right at the train station), art galleries, shops and restaurants.